God or Self – Where is Your Focus?

I know that many of you have been traveling this summer. You may have just arrived back in the UAE or perhaps you are still in a state of flux somewhere in the world. That is the nature of the Dubai expatriate life in the throes of the desert heat. For me, there is one aspect of expatriate summers that I really love, and that is to hear the word of God preached wherever I happen to be. Like me, many of you may have two churches you call home. This week I was in Houston, Texas and my pastor there told a funny story that I’d like to share with you. 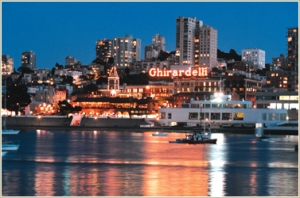 He made a resolution this year to only eat sweets on the weekends. I admire his courage, most of us would be doomed from the start. He had the good fortune this summer to visit Ghirardelli Square, the home of Ghirardelli Chocolate in San Francisco, California. He had the bad fortune to comment in a previous sermon that he enjoyed three of their fabulous ice cream sundaes while there. Be careful what you say in public! One astute member of the congregation managed to point out to him later that perhaps he had broken his sweets commitment, as his itinerary seemed to only allow for two of those delicious delights. At this moment, he knowingly looked out at the congregation and said, “Some people like to play stump the pastor”. Don’t you just love people who point out your shortcomings? Pastors especially do, unfortunately they’re expected to be perfect. At first he pleaded the fifth, then he eventually confessed. “You caught me”, he said.  His story is a tongue in cheek example of our more serious walk of faith. The point being that sheer willpower is never enough to avoid the desires of the flesh. Depending on self is a risky business because…well, we’re selfish by nature. He went on to describe his evolving relationship with God. Saved at 16 years of age, he looked at the years before his salvation as “living just for me”. Then the next 10 or so… “pleading to God just for me”. Finally, he realized his life needed to be “me pleading to God just for God”.  I think we can all recognize the cycle. It is just so tough to turn our focus from self to God. We’re nothing if not good at self-preservation.

Irrisistable…even for the strongest will.

This Friday, on the other side of the world at Fellowship of the Emirates, we will also be learning about the difficulty in turning from self. In our continuing study of the Judges we encounter Samson and the Philistines in the final episode of Israel’s oppression and deliverance during those dark days. Samson’s birth and Nazirite[1] status was ordained by The Angel of the Lord and foretold to his mother in Judges 13, along with his mission to defeat the Philistines. From his birth God blessed him with an extraordinary amount of vigor and strength and the presence of the Holy Spirit for the purpose of delivering God’s people from Philistine oppression. Yet Samson, with all his natural ability and potential, was continually ensnared by his lack of self-control. In particular, his wanton disregard for Israelite law, the God ordained restrictions of his Nazirite vow, his lust for women and his flashes of uncontrolled rage. Samson was unable to turn his focus away from himself and towards God. As a result, he misused his gifts and his calling. 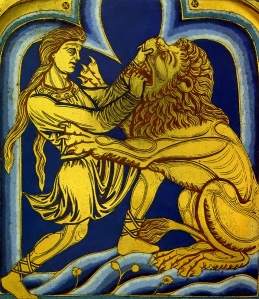 Samson and the Lion by Nicholas of Verdun, 1181
http://freechristimages.org/biblestories/story_of_samson.htm

There is a silver lining in this dark cloud of missed opportunity. No matter how badly Samson missed the mark, the grace of God still worked through his weaknesses. Ultimately Israel was spared from Philistine annihilation.

“…as in the previous deliverer cycles, if anything positive comes of Samson’s life, it is due to the gracious intervention of Yahweh. The man whose birth had promised so much is a disappointment. Nevertheless, ironically, by the free exercise of his own immoral will, Samson serves as an agent of the Lord’s ethical will…”[2] [3]

Studying Samson caused me to reflect on my own life. I communicate with others through the written word. But, I’m also very prone to feelings of inadequacy. Do you see the dilemma? If I focus on myself, my feelings of inadequacy overrun my ability to communicate effectively – and I misuse my gift. If I’m focused on God, then my attention turns away from my inadequacy and towards dependence on my Lord and Savior – and my written expressions bear the evidence.

I encourage you to study the story of Samson this week, and take some time to think about your God-given abilities and your weaknesses. Rest assured, we all have both. Ask yourself, “Am I self-focused or God-focused?” Be encouraged by the words of Paul, “… Therefore, so that I would not exalt myself, a thorn in the flesh was given to me, a messenger of Satan to torment me so I would not exalt myself. Concerning this, I pleaded with the Lord three times to take it away from me. But He said to me, “My grace is sufficient for you, for power is perfected in weakness.” Therefore, I will most gladly boast all the more about my weaknesses, so that Christ’s power may reside in me. So I take pleasure in weaknesses, insults, catastrophes, persecutions, and in pressures, because of Christ. For when I am weak, then I am strong.” (2 Corinthians 12:7–10, HCSB)

[1] According to the Israelite Law of the Nazirite, preserved in Num 6:1–8, a person under the Nazirite committed himself to three abstentions: (1) from wine or any other intoxicating drink; (2) from having his hair cut; (3) from contact with a corpse. Block, D. I. (1999). Vol. 6: Judges, Ruth. The New American Commentary (403). Nashville: Broadman & Holman Publishers.

I'm a returned Christian expat living in Texas after several years residing in the Middle East and the South Pacific. I have the great privilege of writing about my experiences through the eyes of my faith, and to know and love my brothers and sisters serving in Christ's name all over the world. I have a special heart for the missionary community whom I now serve through the Missionary Care Team at my church. I am a writer, researcher, teacher, and archaeology enthusiast who also loves peering into the heavens any chance I get - but most importantly I am a wife, mother and grandmother who loves the Lord. "The fact that I am a woman does not make me a different kind of Christian, but the fact that I am a Christian makes me a different kind of woman." Elisabeth Elliott Shirley Ralston (MA Christian Education, Dallas Theological Seminary)
View all posts by texpatfaith →
This entry was posted in Devotional Essays and tagged 2 Corinthians 12, Angel of the Lord, FOTE, Ghirardelli Square, God, HFBC, Israel, Judges, Nazirite, Philistine, Samson, San Francisco. Bookmark the permalink.