This post was originally published in 2011 after our trip to Normandy.

Pointe Du Hoc is an amazing piece of shoreline. Translated “Hook Point”, this anvil shaped rock outcropping juts into the English Channel giving it an unmistakable profile. The cliffs of this legendary site are situated between Utah and Omaha Beach, making it an ideal strategic location for Germany to defend the occupied French coastline during World War II. From a distance, its rugged beauty conceals the horror and destruction of the D-Day invasion in June of 1944. A closer look reveals a crater laden landscape, now deceptively covered in green grass.

The twisted remains of concrete fortifications remain as they were after allied bombers obliterated the area, preparing the way for the U.S. Army 2nd Ranger Battalion.  The Ranger Monument on the site consists of a gray granite pillar  meant to symbolize the knives used by Rangers to pull themselves to the top of the cliffs. There are two inscribed tablets at its base on either side. It was erected by the French to honor those men who successfully seized the cliff top from the Germans, preventing artillery fire on American troops landing on Omaha Beach. Tourists, many of whom are veterans, roam the site in quiet contemplation. Children play in the craters and climb atop the rubble. High school students mill about, laughing and talking with one another. I think they are oblivious to the meaning of their field trip. Perhaps one day, what happened to me will happen to them. Their life experiences will begin to catch up with what they’ve learned in books. Freedom will take on new significance.

It is truly breathtaking to stand on the edge of these sheer cliffs overlooking the sea. As I looked down on the roiling surf, I could only imagine how terrifying it must have been for Rangers as they approached in landing craft, looking straight up towards their objective 150 ft. above them. I could not conceive how any soldier overcame the terrifying reality that lay before them on that day. How does one summon the courage to do impossible things? Rangers in particular are possessed with a healthy dose of confident invincibility. I know this to be true. But even the Ranger will come face to face with human limitation as these men did on D-Day. I think for some soldiers the courage to do impossible things comes when all regard for self-preservation is exchanged for something else, confidence in a God who loves them and has already secured their fate.

The origins of the Army Ranger are found in the settlement and defense of the Americas in the 1600’s. This new, rugged terrain and the unconventional “raiding” tactics of the Native American required adaptations in traditional fighting strategies. Using their foe as the example, settlers began to rely on stealth and reconnaissance carried out by small groups of fleet-footed men with the ability to survive in the wild. These men and their methods became more effective than traditional European tactics. Reports from the roving bands often included phrases like, “this day, ranged 9 miles”. Thus, the term Ranger was born. Ranger units continued to be an important facet of defense in the New World, participating in all major conflicts from the Revolutionary War until the present day. The modern-day concept of the Army Ranger took shape during World War II. In 1943, the U.S. Army realized the need for a different kind of soldier in efforts to bring down the German war machine. Inspired by British commandos, the army set about developing a recruitment program in the United States. 500 of the best of the best were chosen from over 2,000 men who applied for the opportunity to become part of this elite force. The results produced the first battalions of Army Rangers to serve in the European theatre.

Under the command of a Texan, Lt. Col. James Earl Rudder, members of the 2nd Ranger Battalion trained first in Tennessee, then on the Isle of Wight for perhaps the most dangerous mission of Operation Overlord and the D-Day invasion– the taking of Pointe Du Hoc. Their actions on that day are a testament to their bravery and perseverance in the face of incredible odds and high casualties. When most would have given up, they doggedly kept looking for opportunities to complete their mission. The same was true on Omaha Beach, where the remainder of the 2nd and 5th Ranger Battalions cut the German line, allowing the army to move in. Colonel Max F. Schneider’s yell, “Rangers lead the way!” as troops advanced on Omaha Beach has become the Ranger motto. Today they remain an elite fighting force, tasked with some of the most difficult missions around the world.

Army Rangers have an internal fortitude, drive, and ability to overcome and survive that I can only describe as unnatural. Trained to think, act and execute as a team, they embody sacrificial service for our nation and they would most certainly, willingly lay down their life for a friend.

When Omar Bradley first tapped Rudder to lead the mission on Pointe Du Hoc, it was January, 1944. The scope of what he was being asked to do led Rudder to think that Bradley must have been joking. I suppose Rudder did some serious introspection when he realized the Bradley was intent on carrying out this dare-devil mission. The commanding general of the 1st U.S. Army was asking him to take three companies of men, approach from the sea, scale the cliffs while under fire and destroy six captured French guns being used by the Germans to fire on U.S. landing troops. Then they were to continue inland, setting up a roadblock along the beach roads. Bradley said this of Rudder:

“No soldier in my command has ever been wished a more difficult task than…Rudder.”

When Operation Overlord commenced, Rangers approached the cliffs of Pointe Du Hoc on landing craft equipped with grapnel firing rocket guns used to secure ropes and rope ladders to the cliff wall. Using accumulated bombardment debris, ropes and their own knives, the Rangers climbed in waves, swiftly scaling the cliffs. Casualties were high as they were under constant fire from Germans who held the high ground.. Only about 90 men survived out of the original landing party of 225. Those who remained were confronted with an unrecognizable landscape of bombed out destruction. Communications were disabled so Rudder was forced to send his radio man back down the cliff to get a message to headquarters. The words “Praise the Lord” signaled that Pointe Du Hoc had been secured. 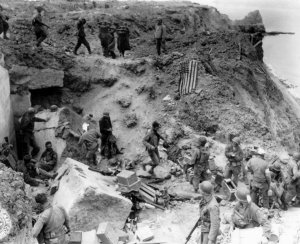 To their surprise, the 155m artillery guns they were supposed to destroy were nowhere to be found. Immediately patrols set out from the point to set up roadblocks and look for the guns. Two particularly savvy Rangers recognized cart tracks leading away from the Pointe and correctly figured they had found the path of the big guns. Unbeknownst to them, the Germans had moved the guns a mile away and camouflaged them in the hedgerows. In the article “Rangers take Pointe”, Lenoard Lomell and Jack Kuhn are interviewed on the events that took place that day. Lomell explains:

“The guns had to have been taken off the Pointe. We were looking for any kind of evidence we could find and it looked like there were some markings on the secondary road where it joined the main road. We decided to leapfrog. Jack covered me, and I went forward. When I got a few feet forward, I covered him. It was a sunken road with very high hedgerows with trees and bushes and stuff like that. It was wide enough to put a column of tanks in, and they would be well hidden. We didn’t see anybody, so we just took a chance, running as fast as we could, looking over the hedgerow. At least we had the protection of the high hedgerows. When it became my turn to look over, I said, “God, here they are!” They were in an orchard, camouflaged in among the trees.”

They destroyed the guns with thermite grenades. Despite the setbacks, high casualties and against incredible odds, all objectives for the mission at Pointe Du Hoc were met by the 3rd day of the D-Day invasion. Army Rangers continued to play a pivotal role throughout the remainder of the war in Europe and Pacific theatres.

I left Pointe Du Hoc thinking about all the Army Rangers I  know. I had a new respect and awareness for their courage, their skills and their sacrifice. So, here’s to the United States Army Ranger, whose actions around the world are rarely known or reported, whose valor and bravery rarely recognized, whose role in securing our freedom and safety rarely acknowledged.

“You were young the day you took these cliffs; some of you were hardly more than boys, with the deepest joys of life before you. Yet you risked everything here. Why? Why did you do it? What impelled you to put aside the instinct for self-preservation and risk your lives to take these cliffs? What inspired all the men of the armies that met here? We look at you, and somehow we know the answer. It was faith, and belief; it was loyalty and love.”

Ronald Reagan at Pointe Du Hoc on the occasion of the 40th anniversary of the D-Day invasion. June 6, 1984

This essay is dedicated to the United States Army Rangers.
The Ranger Creed
Recognizing that I volunteered as a Ranger, fully knowing the hazards of my chosen profession, I will always endeavor to uphold the prestige, honor, and high esprit de corps of my Ranger Regiment.
Acknowledging the fact that a Ranger is a more elite soldier who arrives at the cutting edge of battle by land, sea, or air, I accept the fact that as a Ranger my country expects me to move further, faster and fight harder than any other soldier.
Never shall I fail my comrades. I will always keep myself mentally alert, physically strong and morally straight and I will shoulder more than my share of the task whatever it may be, one-hundred-percent and then some.
Gallantly will I show the world that I am a specially selected and well-trained soldier. My courtesy to superior officers, neatness of dress and care of equipment shall set the example for others to follow.
Energetically will I meet the enemies of my country. I shall defeat them on the field of battle for I am better trained and will fight with all my might. Surrender is not a Ranger word. I will never leave a fallen comrade to fall into the hands of the enemy and under no circumstances will I ever embarrass my country.
Readily will I display the intestinal fortitude required to fight on to the Ranger objective and complete the mission though I be the lone survivor.
—Ranger Handbook SH 21-76[1]

I'm a returned Christian expat living in Texas after several years residing in the Middle East and the South Pacific. I have the great privilege of writing about my experiences through the eyes of my faith, and to know and love my brothers and sisters serving in Christ's name all over the world. I have a special heart for the missionary community whom I now serve through the Missionary Care Team at my church. I am a writer, researcher, teacher, and archaeology enthusiast who also loves peering into the heavens any chance I get - but most importantly I am a wife, mother and grandmother who loves the Lord. "The fact that I am a woman does not make me a different kind of Christian, but the fact that I am a Christian makes me a different kind of woman." Elisabeth Elliott Shirley Ralston (MA Christian Education, Dallas Theological Seminary)
View all posts by texpatfaith →
This entry was posted in Devotional Essays and tagged English Channel, Faith, freedom, German, love, Omaha Beach, Ranger, Ranger Creed, Travel, United States, United States Army Rangers, World War II. Bookmark the permalink.