Here is my continuing story of our trip to Mt. Tavurvur in Rabaul on the South Pacific island of New Britain.  See Part I.

Thankfully, our journey across the bay was smooth and uneventful. Skipper Chris rounded the point in view of “mother”, the largest and oldest cinder cone. She is currently dormant and deceptively green and majestic. The water grew warmer and warmer as we got closer. We pulled up onto the black sandy shore, it’s color a result of pulverized volcanic rock and ash. The base of Tavurvur bares the remnants of past eruptions and lava flows. They spread down to the beach in the form of black and gray jagged rock. I noted my running shoe clad feet in comparison to Paul’s bare ones. I heard my husband say, “Are you going up this mountain without shoes?” “Yes”, Paul said, smiling as he led the way. I envied his ease and agility as he scrambled up the base of the volcano, confidently choosing our path towards a low-lying steam vent. I had to carefully navigate my every footfall. Instinctively he would turn towards me and offer an assisting hand.

The Black Beach of Tavurvur 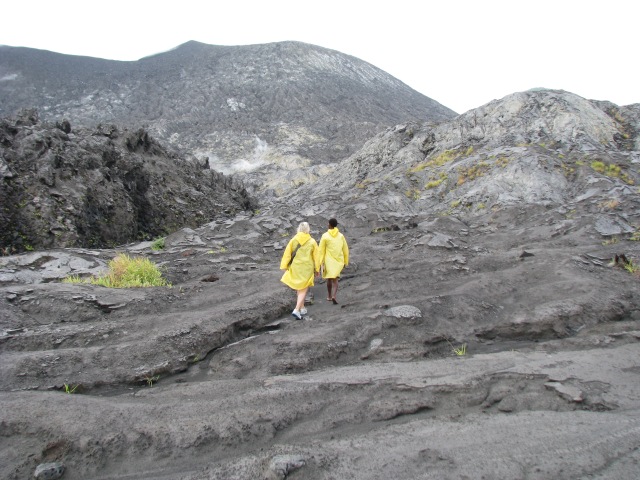 Before long we could hear hissing steam coming from the rocks that were turned yellow by the sulfur coming from deep below. The unmistakable smell of rotten eggs hung in the air. We stood and watched with fascination as the vent expelled steam from the side of the mountain. It was loud and it had a certain rhythm that made me wonder what type of force underneath the earth could possibly produce that kind of cadence.

High above us, the summit of Tavurvur continued to belch light gray ash. We ascended higher, drawn like Frodo and Sam to the top of Mt. Doom. Soon though, my legs told me it was time to turn around. Much to the chagrin of the men, we began our descent back down to the beach. I stopped often to assess the path in front of me, more treacherous now – the rocks were wet and slick.

Suddenly the ground began to rumble and shake beneath my feet. A loud explosion, like a cannon-shot, came from above. I turned and looked up to see Mt. Tavurvur ejecting massive boulders from her top. Thick black smoke and ash billowed into the sky.  ‘Wow. This is crazy. I’m going to get crushed by falling boulders’, I thought. ‘On a remote island in the Pacific…like maybe no one will ever even find me.’ I was thinking of Frodo and Sam again…happy I didn’t have a ring to destroy, but wishing a gigantic eagle would come pick me up. That would’ve been awesome. Lucky for us, the trajectory of the mountain’s caldera put us out of harm’s way.

From a safe distance, we watched Tavurvur angrily spew her insides for a couple of minutes before continuing our journey down. On the beach Chris was all smiles. “The mountain blew for you!” he said. I smiled at him. “Yes, it certainly did.”

We continued to be mesmerized by the volcano’s activity, past and present, as we toured the harbor. A Japanese stronghold during World War II, the harbor is littered with relics from the war, both above and below the water. It also bears the scars of the volcano’s destructive eruption in 1994. Evidence of a town quickly abandoned is everywhere. Particularly striking was the overgrown runway from the old airport, dramatically sheared off at the water’s edge. The Volcano Observatory sits high on a hill above the harbor, continually monitoring the mountain’s activity in case of the need for evacuation.

Remnants of war and eruptions

As we headed out of the harbor, past the Vulcan cinder cone and the distinctive Beehive remnant, I thought about the resiliency of the island’s inhabitants. They seem content to live near such potentially destructive power that could awaken at any moment. So unlike me, constantly assessing my risks. 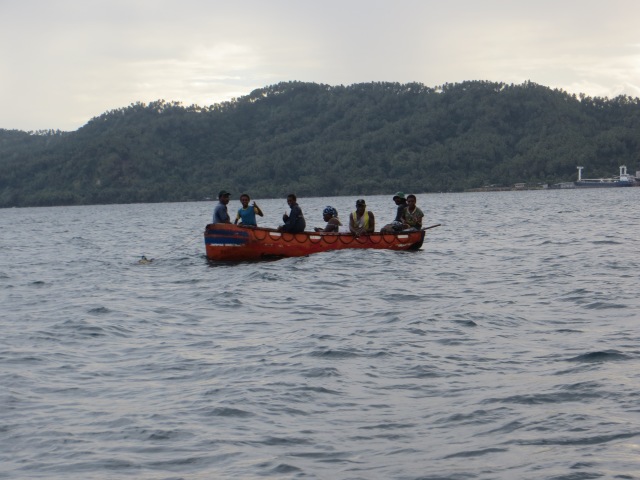 Inhabitants of Rabaul fishing near the shores of Tavurvur 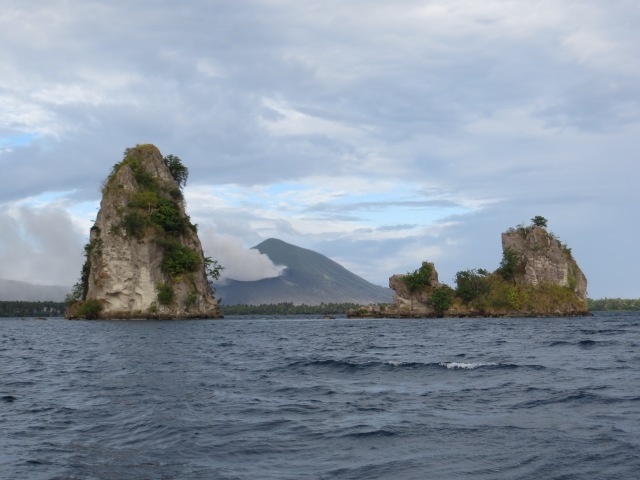 The Beehives in Rabaul’s Harbor

By the time we headed for home, it was late afternoon. The wind was stiff, which made for some very large swells and a very long trip. The little banana boat whacked its way back across the open water in a manner that scared the living daylights out of me. I was hanging on for dear life the entire time. My husband stood with his face in the wind, holding the rail on the side of the boat and loving every minute of it. I guess it’s true that opposites attract. What a day and what a once in a lifetime experience! As I stepped out of the boat onto dry land I looked at the dark gray muddy ash still on my shoes and remembered a couple of lines from my favorite movie:

Sam ~ “There and Back Again: A Hobbit’s Tale by Bilbo Baggins, and The Lord of the Rings by Frodo Baggins. You finished it.”

Frodo ~ “Not quite. There’s room for a little more.”

I'm a returned Christian expat living in Texas after several years residing in the Middle East and the South Pacific. I have the great privilege of writing about my experiences through the eyes of my faith, and to know and love my brothers and sisters serving in Christ's name all over the world. I have a special heart for the missionary community whom I now serve through the Missionary Care Team at my church. I am a writer, researcher, teacher, and archaeology enthusiast who also loves peering into the heavens any chance I get - but most importantly I am a wife, mother and grandmother who loves the Lord. "The fact that I am a woman does not make me a different kind of Christian, but the fact that I am a Christian makes me a different kind of woman." Elisabeth Elliott Shirley Ralston (MA Christian Education, Dallas Theological Seminary)
View all posts by texpatfaith →
This entry was posted in Blog Entries and tagged Expat, Mount Doom, New Britain, Papua New Guinea, Rabaul, Tavurvur, traveling in the south pacific, Volcano, World War II. Bookmark the permalink.