On January 11, 2012, I boarded Emirates flight 211 – Dubai to Houston, probably for the last time. The inevitable relocation notice came in October that my husband and I were moving on to another assignment in Papua New Guinea. I couldn’t believe my time in Dubai was really at an end. In December, we shared our last Christmas in the Emirates and quickly got down to the business of household inventories, walk-throughs, closing accounts, canceling visas and saying our goodbyes – it was pretty overwhelming. So, as I settled in for the sixteen-hour flight I was thankful for the time to reflect on this most recent change in my life.

I consider myself fortunate for the opportunity to reside in the Middle East. Dubai, in particular is a place where everything is billed as bigger, better and faster – it makes living there a lot of fun. From the top of the Burj Khalifa to the dancing fountains at Dubai Mall to the desert safaris, I had some incredible once in a lifetime experiences. Just driving Dubai’s main thoroughfare, Sheikh Zayed Road (affectionately know as Sheikh Zed) was an adventure unto itself. There is however, one aspect of my life in the Middle East that eclipses all others, my surprising journey as a Christian expat living in an Islamic country.

Before our move in 2010, several people warned me that I might have to be very secretive about my Christian faith. I didn’t know if I could worship openly or if I would even be able to participate in bible study. I really wanted to continue some of the work I’d been doing for my pastor in Houston but I was advised not to ship my hardback research library for fear my books might be confiscated. I hoped I could rely on my electronic resources and social media and that my favorite internet study sites weren’t blocked. I heard stories from Christians working in the region of monitored emails, phone conversations and even conversations in public places. Some talked of passports being taken and visas cancelled on charges of proselytizing. I knew had to step lightly because I was in Dubai because of my husband’s employment, something I certainly didn’t want to put at risk.

In reality, I found there was an element of truth to all the things I’d heard about, but the situation was not near as dire as I’d imagined. To be sure – living under Sharia law called for wisdom and discernment in much of what I said and did. And the level of spiritual warfare I encountered caused me to trust Christ as never before. But in the midst of an environment hostile to the gospel, God prepared my path. He showed me how to live, serve and glorify Him as an alien abroad. As a result, I experienced a rich life of faith and several rewarding ways to minister in the name of Christ. Does that sound like a familiar turn of events to you? It should. I know that I didn’t have to look far in scripture to find examples of God’s people living as aliens in foreign lands. Abraham, Joseph, Esther, Ruth and Daniel are some of the most notable that lived the expat life. They had no permanent home, no citizenship and no real rights, yet there is another common thread that runs through their stories. In their faithfulness to God, they were uniquely positioned to become very important parts of the amazing tapestry of God’s story for mankind. The same is true for you and me. By His power we too are able to serve and glorify His name, no matter where we are, no matter how futile our circumstances may seem.

I came to Dubai fearful and uncertain about what I would experience in regards to living out my faith. I came with assumptions and preconceived notions about the restrictions of living in an Islamic country. I left with a new understanding of the universal power of Christ and a heightened awareness of the impact of being an American Christian abroad. In the Middle East, where political and religious tensions are so intertwined, I was able to find my way as a faithful follower of Christ. My life was enriched by the fellowship of other Christian brothers and sisters from all over the world and what we were able to do together.

I look forward to sharing my experiences with you in the months to come – what I’ve come to know, and what I’ve yet to learn as an alien abroad. 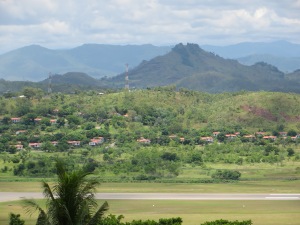 I'm a returned Christian expat living in Texas after several years residing in the Middle East and the South Pacific. I have the great privilege of writing about my experiences through the eyes of my faith, and to know and love my brothers and sisters serving in Christ's name all over the world. I have a special heart for the missionary community whom I now serve through the Missionary Care Team at my church. I am a writer, researcher, teacher, and archaeology enthusiast who also loves peering into the heavens any chance I get - but most importantly I am a wife, mother and grandmother who loves the Lord. "The fact that I am a woman does not make me a different kind of Christian, but the fact that I am a Christian makes me a different kind of woman." Elisabeth Elliott Shirley Ralston (MA Christian Education, Dallas Theological Seminary)
View all posts by texpatfaith →
This entry was posted in Blog Entries and tagged Burj Khalifa, Daniel, Dubai, Expat, heavenly citizenship, Middle East, Papua New Guinea, Sharia, Sheikh Zayes. Bookmark the permalink.