The Struggle to Find Strength in Weakness

When I was in college I was a huge fan of author Robert Ludlum and his iconic character Jason Bourne. When Matt Damon assumed that role in the wildly successful Bourne trilogy movies several years ago, he brought to life a character that successfully invokes sympathy and fear at the same time. Why? Jason Bourne is a skilled assassin, with a significant handicap. He has no memory of who he is, where he came from or why he is what he is…a dangerous combination. In an effort to unravel the mystery of his life and find justice, he follows his instincts, does what he knows and uses what he has. It turns out his handicap makes him more clever, more resourceful and even more fearless. It is amazing what an assassin can do with a book, a pen, a magazine and a towel.

Matt Damon as Jason Bourne – an assassin with amnesia known for his skill with everyday objects.

As our study of Judges continues this week, we meet another highly trained assassin with a handicap. Like Jason Bourne, he is very clever, resourceful and fearless. As Israel’s cycle of sin continues in Judges 3:12-30, the nation is oppressed by an evil Moabite king. This time God chooses Ehud to deliver His people. Ehud is a Benjamite, noteworthy because Benjamin means—son of my right hand and because the Benjamites were somewhat famous for their ambidextrous skills (Judges 20:16 and 1 Chronicles 12:20).  In a bit of an ironic twist, the story quickly reveals that Ehud is left-handed. While Ehud may indeed have been an ambidextrous Benjamite, most scholars feel the original Hebrew indicates that he was “a man handicapped in his right hand”.  It is evident that his “feats of daring do” in this story are not hampered by his physical disability as he carefully plans and brazenly executes the perfect assassination of Eglon, the oppressor of God’s people. 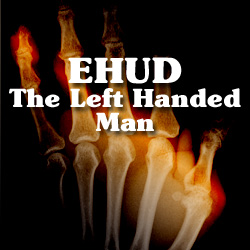 I’m warning you, this is a violent and graphic story (interspersed with a bit of comedy!). It reads just like a scene from a Hollywood movie. You may be surprised, even shocked that there is an episode of this nature in the bible.  It is a fact of our faith that the preservation of God’s people and the road to mankind’s redemption was a bloody one, filled with sacrifice and incredible acts of bravery. It still is.  Do not turn your head from the unpleasantness of our history. Matt Chandler says in his book The Explicit Gospel, “We have to feel the weight of God’s severity, because without feeling the weight of his severity, we won’t know the weight of his kindness, and we won’t be able to worship him and him alone. Worship of him is why we were created.” I think that is a concept worthy of some serious thought on our part.

Ehud had a disability and a double edged sword

It is a struggle to find the courage to serve God when he calls us to something scary or difficult. We often don’t think we have what it takes. It is an even bigger struggle to believe we can be delivered from our current trials or even for salvation.

Israel cried out for deliverance and God enabled a disabled deliverer. Scripture is filled with similar accounts. It is a basic tenet of our faith that our weaknesses are made strong in God’s hands. Look no further than the hall of faith in Hebrews chapter 11 for an encouraging recounting of our legacy of bravery. It still happens.

Are you searching for deliverance? Is there a weakness in you that God wants to use in a powerful way? Read and be encouraged through the story of Ehud – God’s left handed right hand man.

That day Moab was made subject to Israel, and the land had peace for eighty years. Judges 3:30

I invite you to partake of further teaching on Judges on the Fellowship of the Emirates – Dubai website where audio sermons are available for download.

I'm a returned Christian expat living in Texas after several years residing in the Middle East and the South Pacific. I have the great privilege of writing about my experiences through the eyes of my faith, and to know and love my brothers and sisters serving in Christ's name all over the world. I have a special heart for the missionary community whom I now serve through the Missionary Care Team at my church. I am a writer, researcher, teacher, and archaeology enthusiast who also loves peering into the heavens any chance I get - but most importantly I am a wife, mother and grandmother who loves the Lord. "The fact that I am a woman does not make me a different kind of Christian, but the fact that I am a Christian makes me a different kind of woman." Elisabeth Elliott Shirley Ralston (MA Christian Education, Dallas Theological Seminary)
View all posts by texpatfaith →
This entry was posted in Devotional Essays and tagged #strength in weakness, disability, double edged sword, Ehud, Fellowship of the Emirates, God, Israel, Jason Bourne, Judges, Matt Damon, Robert Ludlum, struggle. Bookmark the permalink.