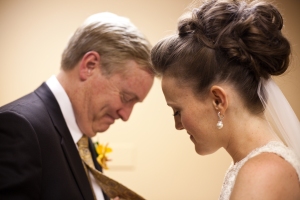 There are times when words are not enough

Chains do not hold a marriage together.  It is threads, hundreds of tiny threads which sew people together through the years.  ~Simone Signoret

And the LORD God caused a deep sleep to fall upon Adam, and he slept: and he took one of his ribs, and closed up the flesh instead thereof; and the rib, which the LORD God had taken from man, made he a woman, and brought her unto the man. And Adam said, this is now bone of my bones, and flesh of my flesh: she shall be called Woman, because she was taken out of Man. Therefore shall a man leave his father and his mother, and shall cleave unto his wife: and they shall be one flesh.Genesis 2:21-24 (KJV)

It was overwhelming. Clicking through the hundreds of photos triggered memories so fresh, it was like my son and daughter-in-law’s wedding had occurred yesterday.  It had been five months since that fabulous week of celebration in Colorado. With one child married and one in college, the remaining members of my family moved from Houston to Dubai a scant twenty-six days later. Preparing for our first expatriate assignment had required all my focus. The move and the flood of emotions I knew I would experience had kept me from giving the wedding photos my full attention. I slowly clicked my way through the day’s events—“Getting Ready,” “Bridal Party”— and finally stopped in “Ceremony.” Before me was an image of my daughter-in-law adjusting her father’s tie just before the ceremony began. Only minutes before he would place her hand in my son’s hand and “give her away”.

Everything he felt was reflected on his face.  Her father’s expression reminded me why the human race is set apart from the rest of God’s kingdom. Evident in his clear blue eyes and wry smile was resignation, sadness and most prominently, love and affection. She would still be his baby girl, but their relationship was about to undergo an inevitable change.

I remember seeing that same expression on Paul’s face during the ceremony as the pastor spoke those familiar words, “Who gives this woman to be united in marriage?”

“Her mother and I,” he replied.

I wondered about the time honored tradition of giving the bride away. This bride was independent, strong, and very competent. By the western world’s standards, it seemed so unnecessary, unless of course, you are a loving father.

Just twenty three years old—an Army officer, my son stood tall in his dress blues. His composed and confident demeanor conveyed ease and a readiness to be married. Satisfaction and sadness equally occupied my heart. I remember being acutely aware that the last vestiges of parental dependence were rapidly disappearing. That wild little boy who ran and played so hard, made guns out of toast, and wanted to know everything about everything had grown into a loyal, loving and fiercely independent young man.

I wondered if he felt the reality of “leaving”. Was he aware of the subtle break in the bond with his father and mother?  Certainly it was unnecessary, unless of course, you are a loving husband.

Wedding days can be notoriously memory-free for their participants. Nerves and emotions can often prompt folks to say, “I don’t remember a thing” or “it’s all a blur”. As the mother of the groom I was trying hard to keep it together, stay focused and take in every detail.  Transcending all of that was the knowledge that I was witnessing a reenactment of the first sacred union. A loving father brings his daughter to be united with her loving husband. A son leaves his father and mother to be united with his wife. They become one flesh—a new family. I was aware anew of the timeless implications and undeniable wisdom of leaving and cleaving.

There is a stark change in focus for a man when he feels the full weight of taking a partner for life. When a woman is given in marriage by her father to the bridegroom, her relationship to her father and mother has also progressed to a new level. The original Hebrew word for leave is azab, and it means “abandonment, to be forsaken, to leave behind or to discard”.[i]  The meaning emphasizes the need and desire to end a relationship of dependence in order to become independent and make one’s own way.[ii] Similarly, the Hebrew word for cleave is vav, meaning “stick with” or “stick to”. [iii]  The word suggests the ideas of passion and permanence.[iv]

A man and a woman turn away from their parents and join together in a “one flesh” union. Two threads are woven into one new piece of cloth.[v] Ideally, an inseparable bond is created where lines of authority are clarified, independence is established, generations continue, a faithful heritage grows deeper and God’s presence is evident through all victory and suffering.

The day after the wedding, after one more celebratory brunch and another round of goodbyes, it was time to head off for their honeymoon. As they pulled away, I thought, “boy they really are pulling away”.  So much was left unsaid. All of our relationships had undergone a necessary change. The distance between us would be great. I knew the phone calls would lessen, the visits would be fewer, and requests for advice would dwindle over time.

A couple of hours down the road, he called.

“It sure was”, we told him, choking back the tears, “in more ways than you can ever imagine”.

A man leaves his father and mother and cleaves to his wife. It is right, it is good.

I'm a returned Christian expat living in Texas after several years residing in the Middle East and the South Pacific. I have the great privilege of writing about my experiences through the eyes of my faith, and to know and love my brothers and sisters serving in Christ's name all over the world. I have a special heart for the missionary community whom I now serve through the Missionary Care Team at my church. I am a writer, researcher, teacher, and archaeology enthusiast who also loves peering into the heavens any chance I get - but most importantly I am a wife, mother and grandmother who loves the Lord. "The fact that I am a woman does not make me a different kind of Christian, but the fact that I am a Christian makes me a different kind of woman." Elisabeth Elliott Shirley Ralston (MA Christian Education, Dallas Theological Seminary)
View all posts by texpatfaith →
This entry was posted in Devotional Essays and tagged children, Colorado, Dubai, Expatriate, Father's Day, God, Houston, Marriage, sacred, Wedding. Bookmark the permalink.

5 Responses to Leaving and Cleaving – Reflections for Father’s Day